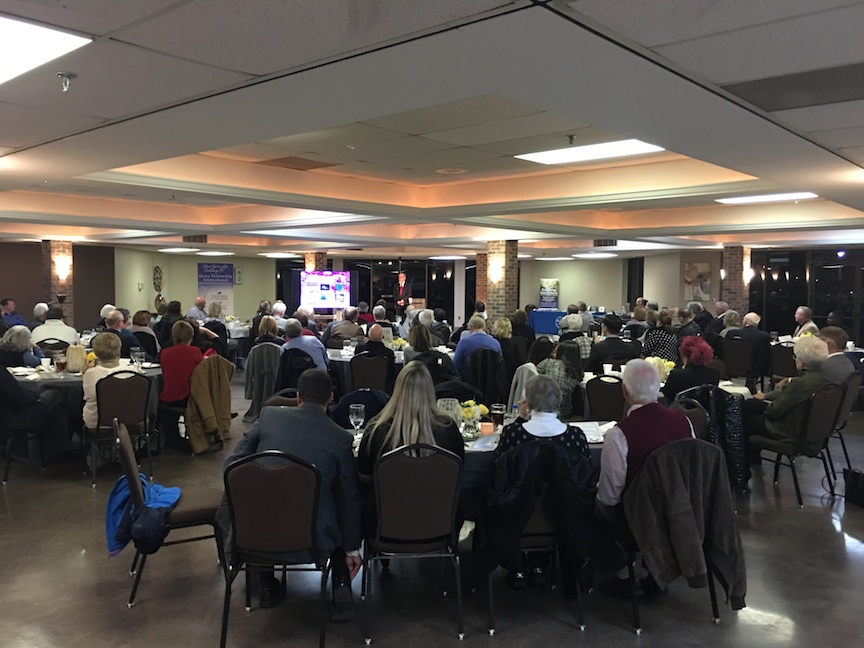 On November 16, 2019 Grace Fellowship International had a thanksgiving banquet to celebrate 50 years of ministry. Over 90 attended the event which included a dramatic presentation by Ron Solomon (Hudson Taylor), testimonies, music and a devotional message by Dr. Phil Jones. To view video recordings of the banquet program, visit the 50th Anniversary landing page: https://gracefellowshipinternational.com/50th-anniversary/

The following article is featured in our current newsletter, Glimpses of Grace.

From Industry to Ministry: The Launch of GFI

In the summer of 1969 Chuck began to have a dis-ease about remaining in industry. Although several years earlier (before God dealt with his life) he would have panicked at the thought of making a living “on the outside,” he now had total peace about leaving and knew what it was what God would have him do; but he had to have God’s confirmation. He had just organized Grace Fellowship International in May of that year, with John Stevens and Dr. Buker as board members, so he thought he should have their counsel, something from the Word, and circumstances. If all of these lined up, he could be pretty certain he was following God’s direction rather than his own.

On approaching the GFI board members, they didn’t say “yes”; but they didn’t say “no” which left him to the Word and circumstances. As he read in the Word all he could come up with was the number 40, which he later found was the number of “experience.” He was coming up on age 40 which fit; but he could have been twisting this around to suit the occasion so he could not trust that either. This meant that he would have to analyze the circumstances to see if they would agree. As he summarized his position, he did not have funds to support his family unless he could find some reserve funds on which to operate as he made the break from industry and transitioned to ministry. If he quit his job, he would only receive vacation pay whereas if he were to receive a layoff, company policy dictated that he receive 11 weeks of pay plus his vacation. However, the company was not in a layoff mode and since it was not likely that management would be in favor of such an option he did not bother to inquire about it.

Chuck began to pray about the situation, then the company needed to lay off some employees. He could have offered to take a layoff to save the job of someone else, however, he told the Lord that he would like for his direct supervisor to come to him with the offer of a layoff. That December, his direct supervisor came to him and said, “Solomon, what would you think about a layoff?” He replied, “I think it’s about time!”

Chuck walked out a free man the next month with no salary and no promise of financial support by a church or any individual. God had called him; and God had set the time, so Chuck was confident that He would pay for that which He ordered! His wife, however, was not so certain; and she retreated to the bedroom to pray it out and search for a job for herself at the same time. After a week or so, Sue was given total peace from the Lord about it as well, and she has walked by his side from that day forward.

Incidentally, God did provide for all their needs as He promised to do in Phil.4:19: “But my God shall supply all your need according to His riches in glory by Christ Jesus.” The layoff was in January; and Chuck started full-time ministry in the basement of their home in Lakewood, Colorado on February 1, 1970. At that time they had three teenagers, one of whom was starting college that Fall. When he left his job, Chuck cut his salary almost in half and drew it out of the account where he had placed his severance pay; once the severance pay was exhausted, he continued to draw out the same amount from the GFI account where all gifts were deposited and which the Lord was constantly replenishing.

From the beginning, God began to honor His calling with transformed lives and to provide opportunities to speak in area churches, which resulted in hurting people scheduling appointments. After about four months of operating from their basement, John Stevens, a GFI board member, made it possible for them to have a basement suite of offices within his Savings and Loan building. He, himself, paid the first and last month’s rent in advance — $200!

God’s faithfulness was demonstrated in that they never had a need from that point forward that was not met. In addition to meeting their own personal needs, millions of dollars were supplied to GFI, not only for the initial offices established that year, but for the many related and spin-off ministries that followed.

-from The Story of GFI–God’s Faithful Intervention

Since 1970, Grace Fellowship International has been helping disciplers to live victoriously, disciple strategically, and counsel effectively.